INSTALMENT 10 OF MY JOURNEY WITH CLUSTERFLUFF THE BRAIN TUMOUR 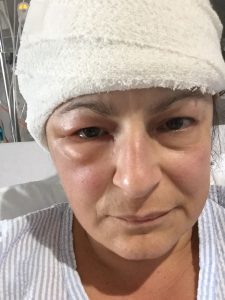 Remember how I was joking about having ‘lasts’ last week?

The initial surgery went well, as expected, but was a little long. I hit the surgery table at 7.30 am and got to recovery 11.30 am, waking up around 1.30 pm. And again to Chris’s face around 2pm. He told me he’d read the ‘just in case’ letter I’d left at home for him.

*We should all write our loved ones those letters more often and not just in case.

But later in the afternoon, things went a bit awry.

Severe pain hit as did the throwing up (didn’t I say the spewing was the bit I really really wasn’t looking forward to?). I cried, feeling like a big wuss. I thought I was just emotional and this was the ‘sore’ bit the doctor had talked about. The pain got worse. They gave me Endone, twice. It had no effect.

They gave me morphine.

I started to lose function in my left arm.

I don’t remember much after that.

The doctors told Chris they were worried it could be a deep bleed, because the tumour had been deeper into the brain than expected and wrapped around an artery, which would cause paralysis if they had to clip it off.

Chris informs me he signed my life away. Thanks honey xx

He says I was taken for an emergency CT scan around 5pm, kicking some other poor sucker out.

The first scans showed nothing, so the docs assumed I was just having a hard time with the surgery area itself – muscles, bone and what not.

I lost total function of the left side of my body.

The high res scans came back. The bleed was obvious as was a blood clot. They rushed me back to surgery.

I woke up at midnight to Chris’s beautiful, concerned face.

He told me the bleed had been in a ‘good’ place after all – a surface artery where the tumour had spread along the dura layers, but the blood had pooled deeper into my brain causing pressure. The artery had probably popped due to a spike in my blood pressure and swelling in the area.

Just waiting on results from another CT today and I should get out of the High Dependency Unit and into my own room. OMG there’s a woman in here who snores like a tractor Lol

The doctors and staff have been absolutely phenomenal.

I feel so grateful albeit a little worse for wear, but have full functionality back. So much better than yesterday.

And I can still write. Whoo hoo!