My scars are not ugly; they’re testimony to the skill of my surgeons.

Strength
It’s been a week of being surrounded by strong women who have nurtured me, held me up, made me laugh and think outside myself.

A week of family connections. A week of starting to pick up the pieces of my work and trying to find motivation. Of trusting Chris to completely reorganise our pre-booked holiday because the doctors were horrified when I mentioned we were planning on flying to FNQ (Far North Queensland).

First outings
My slightly less hirsute scalp and I have been out in public a few times this week. The first was to a café with my cousins. It crossed my mind perhaps people might find the sight of what looks akin to a naked mole rat on the side of my head a bit off-putting during dinner, but my attempts at wrapping my noggin in a scarf failed – the wounds were still too fragile and some bits were still squidgy-wobbly. So I thought screw it, this happened to me, I’m not hiding it. Besides, it’s a great conversation piece. I stuck my head at them and said, ‘Go ahead, check it out’.

Treatment has been cat scans (see left) antiseptic solution, rosehip oil, vaseline and fresh pillowcases. A few days on and I’ve now got carpet pile growing. It’s spikey and tufty, as though I could clean my boots on it – maybe once I’ve got a few more yoga sessions under my belt. 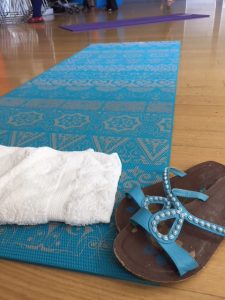 Speaking of yoga, I did my first return class last Sunday. Nobody stared – which is the point of yoga: concentrate on what’s on your own mat. At first, my body went WTF? This isn’t cheesecake. ‘No, it’s better,’ I promised. And it was. It did, however, highlight a strange development in my recovery – I’m still experiencing constant pins and needles in my left hand, and occasional face tingles and numbness, but now my hand has developed a new trick: it feels things differently to what I’m seeing.

Every time I did a Downward Dog, lefty felt bulges in my mat, as though there were lumps under there. Since then, I’ve found if I close my eyes, the angles and shapes I’m touching bear no resemblance to the real objects in my hand. I got frowns when I relayed this to my doctors, but they all agree the process in an unknown quantity and things should settle down once my brain stops having a hissy fit about being prodded  by uninvited utensils and learns to accept that its roommate is not coming back.

Asides
Coconut water: I’ve become addicted. This may have something to do with my kidneys being a bit unhappy with the scan dyes and meds. We’ll  be keeping an eye on them but no NYE celebrating for me. 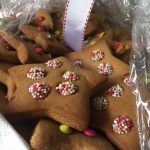 Gingerbread backfire: I tried milking the sympathy card by telling a friend I no longer had any reason to get out of bed in the mornings because I’d run out of her freshly cooked gingerbread. I could now build five gingerbread houses with the supply she delivered (not that I’m complaining). Love you Babe xx 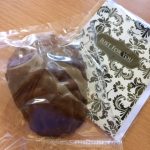 Chocolate brains: Chris and I ordered a bunch of personalised ‘Thank You’ smarties for the neurosurgery and nursing staff at Monash. My girlfriend who owns Designer Chocolates at Chocolate Works also delivered me an extra special gift:  A chocolate brain! LOL. This went straight to Mr Andrew Danks, the head of neuro who did my op. Wish I could have seen his face.

A very cool adventure
Over the next month, Chris and I will be spending 6 days  travelling on trains: first to Sydney to visit family, then to Brisbane for NYE to climb the Story Bridge for the midnight fireworks, on to Cairns to stay with more family, then a couple of weeks in Port Douglas on our own. Bliss.

Philosophy for the future
What ifs may never happen. Now is all we have.