So, about the anti-seizure meds: they are reputed to sometimes cause hallucinations. Hmmm did this stuff really happen?

BTW: no spider pics appear here – some of my mates have phobias – but there’s spidey talk, so just preparing you.  Jo B. some of this may be your doing.

Interesting fact: The arachnoid (as opposed to an arachnid) is the fine, delicate membrane – the middle one of the three membranes, or meninges, that surround the brain and spinal cord – situated between the dura mater and the pia mater.

Yesterday, I took a break from editing at the library, went for a stroll to the local shops, bought a nectarine and parked my butt on a bench amidst some Australiana bush. I was immediately joined by what looked suspiciously like a redback spider. I jumped. It jumped. Man, can those things move FAST! It bolted under the bench slat. I looked underneath, trying to discern if spidey had the telltale hourglass, when out it popped again. Closer this time. Did I mention how FAST they can move? A blur, I tell you. I thumped the bench. It ran away. Then came back. This was repeated a few times, until I decided to let it have the damned bench. Enjoy, my selfish arachnidan friend. Back at the library, Kathryn suggested it may have had an egg sack close by. I suspect, since I was wearing white, it may have thought I was its egg sack. Nevertheless, its affection will remain unrequited.

Last week, another friend suggested that, after my surgery, we should both go get a tattoo. I mused on this for a while, and being the chicken I am, decided I could do a trial with a cheeky temporary tattoo first. 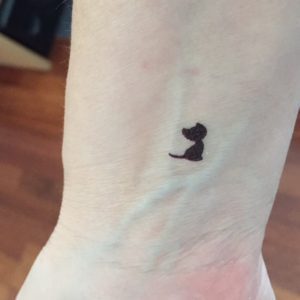 I ordered and received some super-cute kitty tattoos from Ebay. My first foray was this little baby, which I applied last night. And ever since, I’ve been having the crap scared out of me, cos I keep thinking there’s a spider on my wrist. (Thanks, Deb A., for this brilliant idea!)

Aaaaand, today, on another break from editing, I took my coffee outside to the deck and was joined by my real black kitty (who bit me this morning, little cow). And guess what? Another jumpy spider decided to work its way across the table, down the table leg, across the deck, up the leg of my chair and onto my arm. Seeing as it was a cute-looking spidey, I gently encouraged it back onto the deck. It promptly headed for my chair leg again. A thump or two and it scarpered below deck. A few minutes later, I felt a tickle on my arm.

WTF? Am I a spider magnet this week?

I let it have the whole bleeding deck.

Someone tell me spiders are good luck, else I’m staying inside for the rest of the year; nature seems to have it in for me.

And in other news, a lovely friend (thanks Babe) brought me a whole freakin’ baked cheesecake!!! It may have taken me only two days to demolish it, or it may not. I will never tell.

And another beautiful soul (thanks Deb V.) sent me some heartfelt writing about recovery.

Sigh. Still feeling blessed. As Maria sang: “I must have done something good.”

In other, other news. I’m booked in for a pre-clinic appointment for more tests and brain scans on Mon 27 Nov.

PS: I have the best hubby in the world.