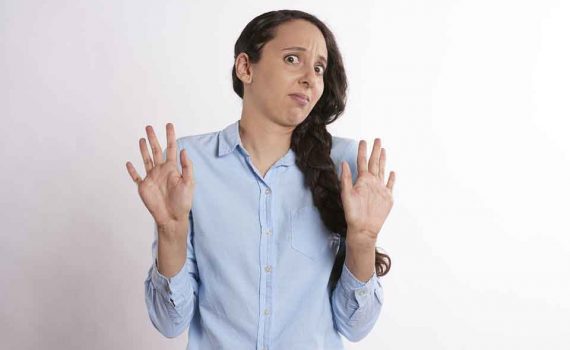 Dealing with criticism is one of the realities of becoming a published author.

People outside our supportive circle of friends and family are going to read and publicly comment on our work. Fabulous! Isn’t that why you write? To affect people? To make them think, to stir their emotions?

But what happens when those comments are constructions of uninformed bile or troll fodder? And all you want to do is stab yourself in the heart? Or better still, stab the reviewer in the heart? How satisfying would that be?

As writers, we know not everyone will fawn over our work, and that’s okay. Potato Potarto. But when we come across a review that’s absolutely stinging and deliberately misconstrued, it can stick in our writerly craws for weeks, months sometimes wiping out every good review we’ve ever read about our work (so sometimes we’re drama queens). Damn it! I hate that. Get out of my head!

Logically, we know this person doesn’t know us, and probably doesn’t know our work well, so it’s not personal — it’s NOT — even though it may feel like an attack. A very, very personal attack. But unless we’re prepared to line ourselves up against a social media firing squad wall, we often have no recourse against these kinds of attacks apart from bitching to the only other people who understand — our writerly buddies. We have no voice to share our pain, to defend our work, or educate someone who thinks they’re in a competition to read fifty books a month and spew forth bile rather than read a book carefully, absorb its subtext and story arc and only then give a considered, informed review — even if they don’t like it (the word is subjective here, not personal).

The only action we can take is to MOVE ON. Block the person from our feeds, our social media, our minds. Don’t go giving them emotional real estate. While you’re stewing and fuming, they’re not even thinking about you. They’re probably sitting in their tracky dacks and stained T-shirt, stuffing their faces with peanut M&Ms and coke, illegally downloading crap movies. It’s the way of the digital world.

Move on! The moment we think about trying to defend ourselves, we’re at risk of falling on our own sharpie pens (or bashing our heads in with our keyboards). Want we really want is an apology, and a troll is never going to apologise, never going to understand the days, months, years and risks you took to wring those words onto the page, or the humungous effort it took to get published. (Have they written a book? Have they been published? Probably not.) So there you are stuck with the bitter taste of powerlessness in your mouth and a broken heart.

Or are you? Perhaps you were smart enough not read those reviews in the first place? Or you arranged to have friend vet them for you first? It’s not such a stupid idea. In fact it’s a brilliant idea. What’s the point of crazily poring over someone’s vitriol, line by line, over and over, trying to understand why they don’t like your book? Why they seemingly don’t like you?

Are we, as artists, drawn to punishing ourselves? Why is it we can have fifty fabulous reviews but that one, uninformed piece of hate is the only one that sticks in our minds, haunts us into sleepless nights and sometimes smashes our confidence? What is it we’re looking for when we insist on reading, then rereading negative reviews, continually churning the words over in our minds, dissecting and seeking to understand? Perhaps we’re looking for fault in our own work. Perhaps we feel we deserve to be shot down. Maybe our own lack of belief in ourselves is seeking a slap across our literary faces.

How do we stop? How do we deal with our fragile egos? I think Elizabeth Gilbert of Eat pray love fame nails it when she says:

That’s smart. But is it smart to completely ignore all criticism? Probably not. When we’re too close to the trees who’s going to help us see the plot holes in our paper forests? People we trust of course. Here’s Elizabeth’s take on it again:

I DO listen to negative criticism about my work, however — but only from certain people, and only at a certain time.

The people who I listen to about my work are people who have earned the right to offer me criticism. There aren’t many of them, but they are precious. They are a few of my closest and most trusted friends, family members, and colleagues.

As for WHEN I listen to criticism? I only listen when there is still a chance to fix or change the work. After the book is published, THERE IS NOTHING MORE I CAN DO ABOUT IT — so why would I go digging for criticism after the book is already printed, and it’s too late?

But what about the good reviews? Should we be avoiding reviews altogether? Of course not. We deserve to hear some happy news. We’ve worked bloody hard to get where we are, and that work never stops. Enjoy the moment. Roll around in it like you’re a sparrow enjoying a dust bath, like a puppy who’s found a roll of toilet paper, a chook who’s found a worm. Go for it. You earned it! Every little bit of it.

Just don’t trawling through Goodreads, looking for that negative review to counterbalance how good you feel before moving onto the next project, putting yourself on the line again. And if you do accidentally stumble across a piece of poo, well, look away. LOOK AWAY! QUICK!. It’s not your poo, it’s theirs. You don’t own it.

Of course, it’s impossible to avoid negativity entirely, but understanding why we feel the way we do, and being able to control our reactions to it, goes a long way to padding our fragile egos.

Here’s the link to Elizabeth’s article. I highly recommend reading it: Elizabeth Gilbert – Dealing With Criticism 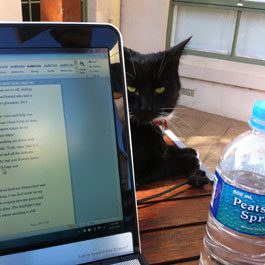 Where do you write?

I do it on the patio with TC

Where do you write? I once tried to do it in the bath. I visualised a leisurely, relaxed activity. I sat my iPad on a chair so I could reach over and type thoughts as they came to me. Dumb idea. Uncomfortable, wet-fingered, yoga-twisting awkwardness is what resulted. At least I can say I’ve tried it.

My favourite place to write is on our tiny front patio under a sun umbrella with one of our two cats supervising (see pic). That’s TC. He keeps his opinions to himself, even when I ask for them. He’s stubborn (or wise) like that. If he had opposable thumbs so he could bring me coffee he’d be purrrfect.

In bed first thing in the morning before distractions set in, is an incredibly productive option. Night time in bed doesn’t really work for me as I’m not a pen and paper girl and I have a noise-averse hubby (key taps can sound like whack-a-mole in the dead of the night) whose day job pays the mortgage and buys cat food. Fair enough, I need to eat too.

I’ve been told Hemingway liked to stand at a chest of drawers near a window in his bedroom, to write. *Goes off to visit good friend Google * True, it seems, and Hemingway wasn’t alone: Kierkegaard, Charles Dickens, Winston Churchill, Vladimir Nabokov and Virginia Woolf were also fans of the vertical stance. Personally, I find being seated on my well-padded butt quite satisfactory for a writing position. The art is hard enough without tiring oneself out physically as well as mentally. Having said that, I’ll probably give it a try because I can.

So where else? I used to frequent a Borders Café to write. Sadly, it’s long gone now. It was perfect for eavesdropping on conversations—essential for picking up nuances in dialogue—and being surrounded by books has a settling effect on me. The tasty coffee and banana bread was a bonus. Your local library is always available for a quiet, disruptive-free zone. Again I think it’s the books thing, plus being around like-minded others with a similar energy is inspiring. Try it. If you get stuck writing you can always read and that’s just as productive.

The weirdest place I’ve written? Not so much weird as tense: making notes by flashlight, in a Far North Queensland community sports centre, with a category 5 cyclone in full force. With no power and a flat iPad battery, I had to resort to pen and paper. I felt terribly ‘authentic’, like an on-the-scene reporter, if that isn’t too wanky a concept.

If you choose to write while up a tree, on the loo, or on a pull-down tray in an aeroplane, do what works for you; words on the page is the aim. Your readers will never know.