Lizzie, Megan and Sam became accidental friends over good coffee, banter and wrong-world jokes at school drop off. Lizzie is a part-time midwife with four kids and a secret past. Sam is an ex-chef and stay-at-home dad with an absent, high-flying corporate wife. Megan is an ex-model single mum with a thriving online business and no time for loneliness. None of them have much interest in their school community, but when tragedy deals Baytree Primary’s reputation a potentially crippling blow, this unlikely trio have to step up. Forced out of their respective comfort zones, Lizzie, Megan and Sam learn more about each other, the school and themselves than they thought possible.

And it all begins at The Drop-Off.

The core message of The Drop-off is that community is pretty damn important. People who need people and all that…as the great lady sang. Now, more than ever before, we are realising just how much we need each other to feel happy and whole. Lizzie, Megan and Sam aren’t living in Covid19 times, but each of them learn this very important lesson over the course of the book. 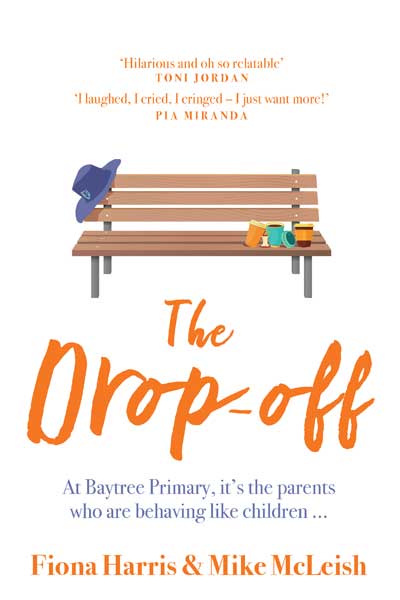 Fiona – I lived in New York for a year in my twenties.

Mike – I dreamt of living of New York for a year in my twenties.

We always knew we wanted to write a story that dealt with themes like friendship, community, family and transformation. These are very big and important themes in our own lives, and we wanted to reflect that with as much humour and heart as we could muster.

Writing this novel was obviously a huge challenge in that we had to WRITE A NOVEL, which is a very big and scary undertaking for anyone. Our background is writing scripts and children’s books, so this was quite a leap, but we were excited about taking on the challenge. The opportunity to dive more deeply into these characters’ lives and into this world we’d created was too exciting to pass up. We already knew our characters so well and had established a tone and voice that we liked and knew would translate well into a book. Plus, it meant we could do some heavy excavation when it came to character and long-form story arcs. We’d also been stockpiling story ideas for possible future series of the show for quite some time, and suddenly were presented with the perfect way to funnel all of our ideas into the book.

The main obstacles we faced were being very busy, so time management was crucial. It was an intense time around the first draft deadline, because we were both having to do some serious multi-tasking. At the same time the first draft was due – and quite apart from the day-to-day machinations of having two kids – we were also launching the second series of The Drop Off, developing a new kids’ TV show, Mike was performing in the David Bowie musical, Lazarus, as well as writing the Helpmann Awards scripts, and Fiona was starting rehearsals for a play, coaching her daughter’s netball team and writing and directing their daughter’s primary school concert.

Fiona – I’m a bit of a structure nerd so I went away for five days on my own to plan out the entire narrative arc of the book, and really delve deep into each of the characters (who had been with us for a few years by then because of the web series) and their respective back stories. It served to not only give me some dedicated writing time away from all distractions, but also allowed me to reconnect with a part of my past that fed beautifully into parts of the book. I’m quite disciplined when it comes to writing, so I made a commitment to write 2000 words a day once I started writing the actual prose. It didn’t always pan out that way of course – kids and life and other work often got in the way – but for the most part I managed to get at least 6000 words written every week over the seven months it took to write the novel. In the last few weeks before the deadline I got so carried away that I ended up with crippling back pain due to sitting in the wrong kind of chair for 6 – 8 hours a day. I now have the correct chair and a lumbar cushion.

With hindsight, what would you say to yourself as a fledgling writer?

I guess I would tell myself to write every day and to focus on my own path, find my own voice, and not worry about what everyone else is doing, as that is simply distracting and toxic for not only your writing but also your soul. I’d also tell myself to keep collaborating with others I respect and admire, as that is how you learn and grow as a writer (and a human being). It’s a wonderful thing if you’re lucky enough to find like-minded people who are talented and share your creative vision. Having a support network to motivate and inspire you is invaluable.

I have an idea for another novel and have started jotting down notes and ideas for that. We are also currently in the process of developing a couple of different projects for television. One is an adult comedy series and one is a children’s series. It’s fun jumping back and forth between scripts and prose, and definitely keeps you on your toes as a writer. 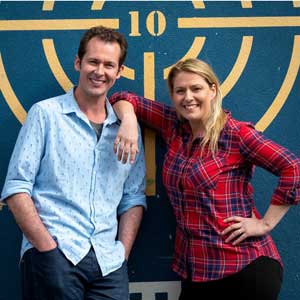 Fiona is a writer, actor, producer, director and children’s author of book series’ The Super Moopers, Miraculous and Trolls. She’s written television sketch comedy shows (Skithouse, Comedy Inc.) and stage shows (Plus One, Footy Chicks) and acted on many television shows including The Beautiful Lie, Tangle and Upright.

Mike is a writer, actor, singer, musician and song writer. He played Paul Keating in Keating! The Musical and was creative consultant and head writer for the 2019 Helpmann Awards. He’s acted in television shows (Utopia, Wentworth and Mustangs FC) and musicals (Miracle City, Georgy Girl: The Seekers Musical, Beautiful: The Carole King Musical).  In 2019, Mike and Fiona released the second series of their internationally award-winning comedy web series, The Drop Off.